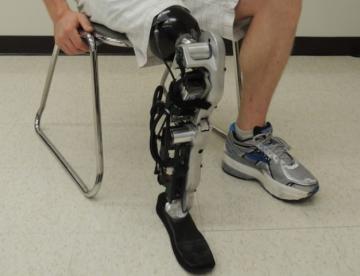 Ossur, an Icelandic orthopaedics company, has developed tiny implanted myoelectric sensors (IMES) that helped amputees to control their bionic prosthetic limbs with the commands sent from their brain.

Ossur's Orthopedic surgeon and director of research and development, Thorvaldur implanted the tiny sensors into the residual muscle tissue of two amputees which they said is responsible for triggering the movement in the prosthesis via a receiver.

Ossur CEO Jon Sigurdsson said he was about to announce in Copenhagen on Wednesday, May 20 that the two amputees are the first in the world to be able to control their lower-limb prostheses while being subconscious.

He said that one of the patients, Gummi Olafsson, lost his right foot and lower leg after a traffic accident during early childhood.

Olafsson , who is presently on trail with the new implants said the implants allowed him to control his bionic leg and foot almost instantly.

Further explaining his experience he said, as soon as he placed his foot on, it took almost 10 minutes to get control of it.

He said he was able to stand up and walk. He could even sit down and can use his muscle to move his foot in the position he wanted to use it.

Olafsson said the whole experience was strange and he was not able to believe that he was actually able to move his ankle.

“It was like, I was propelling it with my tissues, there was no one else performing it, the foot wasn't doing it, I was doing it, so it was extraordinary and terrifying,” he told.

The Implanted Myoelectric Sensors (IMES) is 5 millimetres long and 3mm wide. IMES were provided by the United States-based Alfred Mann Foundation, which develops medical technology for use in patients.