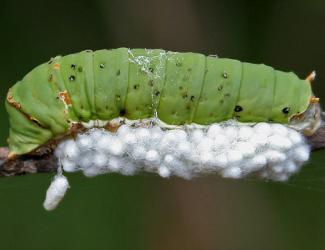 Years of collaborative study at various research facilities across the world has resulted in successful genome sequencing of tobacco hornworm (glutton caterpillar). Researchers from Kansas-State University have shared that this tobacco hornworm is known at ‘gluttonous caterpillar’ because it eats a lot before it grows into the Carolina sphinx moth.

The hungry caterpillar is commonly found in North, South, and Central America and is not a pleasing one for their farmers because it regarded as a pest there. The caterpillar loves to munch on the leaves of tomato plants, eggplants, and potato and pepper plants.

Though the crops from this plant family result in the secretion of chemicals that prevent most insects not to feed on them, this hurdle does not work for this hungry caterpillar. Study’s lead researcher Professor Michael Kanost from Kansas State along with co-researcher Gary Blissard of Cornell University has sequenced the tobacco hornworm’s genome.

The researchers said that this tobacco hornworm is an excellent model to study owing to its large size as it can be stretched up to 4 inches in length. Owing to such a stretchability, the researchers were able to extract tissue samples from the caterpillar.

The DNA of the caterpillar was purified and sent for genome sequencing. By doing so, the researchers will be able to compare similarities and differences between humans and caterpillar in evolution and function of immunity.

The sequencing has allowed the researchers to know the underlying genetic components of the process responsible for observed effects on biology and behavior of the insect. The researchers can use the sequenced genome for making insect proteins for biochemical studies. “This outstanding preservation of gene order may be associated with the specific structural parts of moth and butterfly chromosomes”, said the researchers.

According to a story published on the topic by Genome Web News, by comparing it with other Insecta genomes, the researchers noted a high level of macrosynteny in the moth. Through a genome-wide synteny analysis of four clades from three insect orders, they found that some 87 percent of M. sexta genes could be mapped to the silkworm Bombyx mori. In addition, the researchers found that moths and butterflies shared similar amounts of contiguous ancestral regions with the body louse as fruit flies, even though lepidopterans diverged earlier from louse than drosophilids.