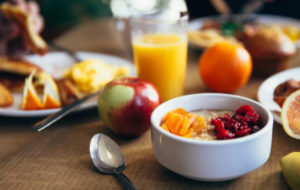 High-energy breakfast and an average lunch can help reduce extra weight, as per new research administered by a research team at Tel Aviv University. The study team added that our metabolism changes throughout the day and a slice of bread during breakfast is less fattening compared to one consumed during the evening. Health experts also suggest eating light during the evening and more during the morning. However, the impact of such changes in the diet is seen over the long term. The study results were presented on Saturday, March 17, at ENDO 2018, the 100th annual meeting of the Endocrine Society in Chicago, Illinois.

The research team also noted that the time of eating and frequency of food consumption also impacts health. The study was focused on a group of 18 men and 11 women, suffering from type 2 diabetes. The study group was taking insulin regularly. The research team divided study subjects into two groups, and they were offered different weight-loss diets. The number of calories in both diets was the same. The first group (Bdiet) was asked to eat three meals, including large breakfast, medium-sized lunch, and light dinner. For the second group (6Mdiet), the study subjects were asked to have six small meals at regular intervals during the day, including three snacks.

Study subjects followed the diet for three months. During the study, the research team checked glucose level of study subjects every two weeks, and their insulin dosage was adjusted as per requirements.
The study team found that on an average, study subjects in Bdiet group lost 5 KG (11 pounds) weight while 6M diet group gained 1.4 KG (3 pounds) at the end of three months.

Daniela Jakubowicz, M.D., the lead study author and a professor of medicine at Tel Aviv University told, “This research reveals that, in overweight insulin-treated type 2 diabetes subjects, a menu with 3 meals per day, which consists of a large breakfast, moderate lunch and small dinner, possessed numerous quick and accurate outcomes as opposed to the conventional diet with 6 small meals equally spread during the day: less appetite, better weight loss, and better diabetes management while taking less insulin.”

The study team also noticed a significant reduction in carbohydrate craving and hunger among subjects in Bdiet group while both were found higher in the 6Mdiet group.

Diet plays a vital role in keeping weight under check. As the majority of developed and developing nations are facing an obesity epidemic, it is crucial for people to realize the importance of the right diet and regular physical activity. With daily physical activity and a balanced diet, individuals can reduce their medical expenses as many chronic ailments can be avoided by keeping a healthy weight.