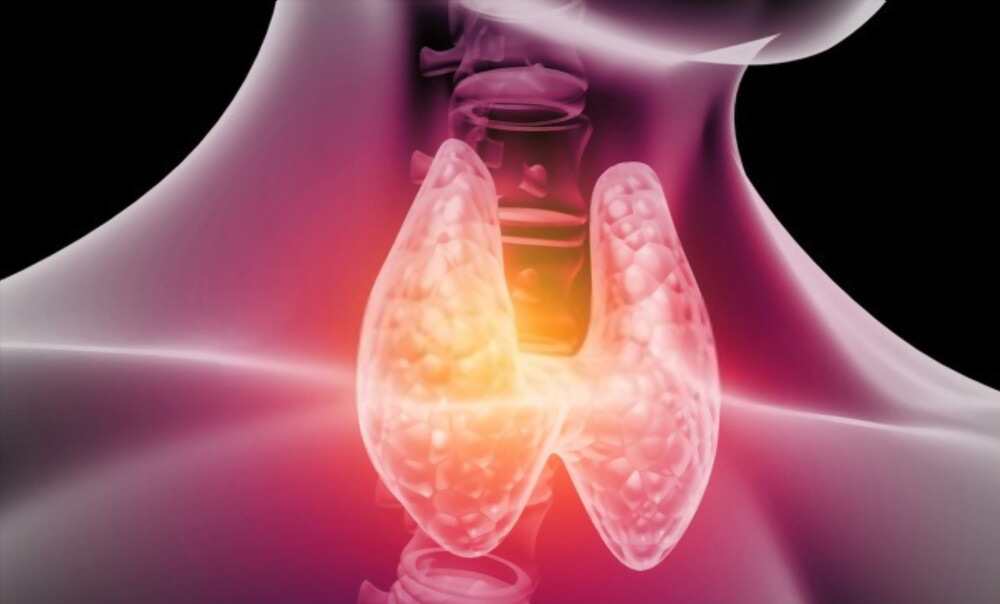 The thyroid gland is a highly misunderstood organ and therefore takes a lot of flack. An estimated 20 million Americans are suffering from some type of hypothyroid condition, and synthetic thyroid hormones are the 4th highest-selling prescription drug in the US.

The thyroid is mostly understood as the gland which regulates metabolism, but few recognize exactly how vast the thyroid's influence is on the rest of the body.

Every single cell in the human body has receptors for the thyroid hormone, which means the thyroid gland can influence every system, organ, and tissue within us, as well as every other hormone-like insulin, cortisol, testosterone, estrogen, and progesterone.

Basically, when the thyroid is out of balance, so are you.

The thyroid gland is often the first body part to get blamed when weight-loss efforts fail or energy levels drop. Still, these issues are only a fraction of the possible effects that can occur from low levels of thyroid hormone (hypothyroidism).

The classic symptoms of low thyroid hormone are commonly known and include:

Because the thyroid has such an enormous impact on other hormone levels and organ function, however, results of hypothyroidism can also consist of high cholesterol, depression, infertility, heart disease, fibromyalgia, IBS, anemia, blood sugar issues, osteoporosis, gallstones, autoimmune disease, and memory problems.

How Does the Thyroid Gland Work?

The thyroid gland is a tiny, butterfly-shaped organ in your throat. It produces many important hormones, including thyroxine (T4) and triiodothyronine (T3).

Most of what the thyroid gland produces is T4 (about 93%). This is an inactive form of thyroid hormone. However, before the body can use it, T4 has to travel to the liver (mainly), where it's converted to T3 (the active form).

T3 is the most critical of all thyroid hormones as it is essentially what signals your genes to increase metabolism.

1. The hypothalamus, a pea-sized gland in the brain, sits up in the skull and monitors hormone levels in the body. If thyroid hormone levels are too low for the body's needs, the hypothalamus sends a signal (Thyrotropin Releasing Hormone) to its downstairs neighbor, the pituitary gland.

2. The pituitary then releases TSH (Thyroid Stimulating Hormone), which does exactly as the name implies and stimulates the thyroid to increase production.

3. Once activated, the thyroid produces T4, which is converted to T3 mostly in the liver and the gut, kidneys, skeletal muscle, and brain.

4. Proteins in the liver then carry T4 and T3 into the body tissues, where they become free T4 and free T3, which act to regulate metabolism.

If this entire system is working properly, thyroid hormone levels will be adequate, and all will be right with the world, but this process can break down at any point along the way and for dozens of reasons. This is why regulating thyroid hormone levels are so confusing and so difficult. Many times it's not simply that the thyroid gland itself isn't working properly.

The thyroid gland doesn't just hang around exerting its authority on the rest of the body. It also adjusts its output to other hormone levels, body processes, and health conditions.

1. Remember, the body has to convert T4 to T3 to regulate metabolism properly, so any illness or disease that interferes with this process can result in low amounts of usable thyroid hormone. Conditions that are known to impede T4 to T3 conversion include:

In the case of impaired T4 to T3 conversion, the body will lack usable thyroid hormone (T3). Still, both TSH (from the pituitary) and T4 (from the thyroid) can appear normal in laboratory testing. Many physicians don't test for T3, so hypothyroidism is never identified. TSH and T4 tests alone are not adequate.

*Synthetic thyroid hormones (which are most often T4) will not fix a T4 to a T3 conversion problem.

2. Autoimmune Disease (Hashimoto's) – 90% of hypothyroid patients have Hashimoto's Disease. This is not a thyroid problem. It's an immune system problem. The immune system is attacking and destroying the thyroid tissue itself. Hashimoto's will result in high TSH levels because the hypothalamus will sense a decrease in thyroid output and attempt to stimulate T4 production via the pituitary.

*These patients will not be helped by thyroid replacement hormones either.

3. Gluten Intolerance – Gluten destroys the gut. In hypothyroidism, the substance in question is a protein called gliadin, whose molecular structure is very similar to that of a thyroid issue.

When gluten has done its damage to the gut over many years, gliadin is able to enter the bloodstream through the small intestine. Gliadin doesn't belong in the bloodstream, so the immune system slaps a sticky note on it, so immune cells know to destroy it. Because the molecular structures of gliadin and thyroid tissue are so similar, the body also mistakenly attacks the thyroid.

*Many people with Hashimoto's are also producing antibodies to gluten, and researchers are now urging physicians to test hypothyroid patients for gluten antibodies.

4. Iodine Deficiency – Iodine is paramount to proper thyroid function. In fact, the very names given to thyroid hormones describe the number of iodine molecules they carry. T4 has 4 iodine molecules, and T3 has 3. Without a proper amount of iodine in the diet, the thyroid can't synthesize these hormones at all.

A number of factors have caused iodine deficiencies in the US, mainly the fear of iodized salt and the reduction of seafood and sea vegetables in our diet.

5. Stress – Stress is not only caused by money worries and work deadlines. Inflammation in the body, low blood sugar, too much exercise, disease, toxins in food, pain, a poor diet, and even lack of sleep can cause the adrenal glands to release cortisol. High cortisol levels depress all three glands responsible for generating thyroid hormones – the thyroid, the hypothalamus, and the pituitary.

*Treating hypothyroidism will not be effective in this case, yet again.

8. Calorie Restriction and Fasting – How ironic is this? Many dieters try to lose weight by eating less and end up depressing thyroid function. As a result, we are making it more difficult to lose weight.

9. Fluoride – Fluoride is widely known to disrupt the endocrine (hormonal) system and is a major reason we suffer from iodine deficiency. Fluoride competes for iodine receptors, using up space on cells where iodine would attach. It's like trying to get through a doorway when someone else is already standing there blocking you.

10. Bromide – Bromide is in the same class of toxins as Fluoride and causes the same problems. Bromide is found in food pesticides, cosmetics, plastics, baked goods (bread), soda, prescription meds, flame retardants in carpeting and mattresses, and hot tub and swimming pool chemicals.

11. Soy – Soy is definitely NOT the health food it's been made out to be. It disrupts hormone levels and has been linked in thousands of studies to immune, digestive, and endocrine disorders, and especially to thyroid damage.

Detection and treatment of thyroid disorders is a confusing matter, so what natural approaches are available now that we've identified the main causes of hypothyroidism?

1. Avoid grains, especially gluten-containing grains, as though they are your mortal enemy. If your immune system creates antibodies to gluten, no amount of gluten is safe. Aside from grains, many processed foods also contain gluten, which can be identified on nutrition labels as hydrolyzed protein, modified food starch, natural flavors, maltodextrin, and anything else with the word “wheat” in it.

2. Avoid soy like it is your other mortal enemy. Soy is also found in most processed foods, fast food, baby formula, and cheap weight-loss shakes.

3. Eat lots of fresh, whole fruits and vegetables. A whole food diet is one of the best ways to normalize hormone levels.

4. Get iodine in your diet by eating sea vegetables, seaweed, and sea creatures (crustaceans, shrimp, salmon, and shellfish). A good multi-vitamin will provide all you need, as well.

5. Selenium. Selenium is essential for converting T4 into T3 and for optimal immune function. It also protects the thyroid against excessive iodine exposure. Studies have shown an improvement in autoimmune thyroid disease with selenium supplementation alone. This is as easy as eating 3 or 4 Brazil nuts every day. But selenium is also found in halibut, salmon, scallops, shrimp, eggs, lamb, mushrooms, turkey, and any good multi-vitamin.

6. Fix your gut. This will begin to occur shortly after the offending foods have been eliminated. About 20% of T4 is converted to T3 in the gut, so this isn't something you should take lightly. Raw fruit and vegetable intake are imperative, as well as a high-quality probiotic.

8. Remove Bromide and Fluoride from your life. Filter your drinking water, eat organic when possible, use glass for drinks and food storage, eliminate soda, and look for as many chemical-free cosmetics and toiletries as possible.

9. For a million and one reasons, supplement with Vitamin D. The body needs Vitamin D for a host of vital functions, among them being the regulation of insulin and blood sugar, coordination within the immune system, and controlling inflammation. A liquid Vitamin D supplement is often my first recommendation with any health issue, including hypothyroidism. It's that important.

10. Omega 3 Fats. These are essential for the repair of damaged tissues and controlling inflammation. Omega-3 Fats are mandatory for nearly every body function. They help form the very structure of every cell membrane in the body. This is not something you want to buy at the supermarket.

As with any health issue, rather than attempting to chase down the origin of the disease and treat it, the first step in regaining balance naturally is implementing sound lifestyle practices. This is often where the problem first began.